Besides following the news about Belarus Free Theater’s production in the “Under the Radar Festival”, New York City, and commenting on the positive reviews it received, I have been drawn to related stories in different venues. Both here in San Diego, at Coronado High School for the Arts, and in Waterbury, Connecticut, at the Waterbury Arts Magnet School, productions of plays that have important social messages about history, including the history of bigotry, have come under scrutiny. 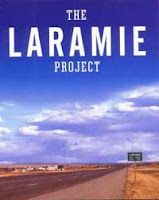 At Coronado HS for the Arts, the play in question was The Laramie Project. While drama teacher, and the play’s director, Kim Strassburger, had gone to great lengths to involve the school and community in creating a moving production, some families thought the material too controversial for their students to attend. Worse though was the proposed–and ultimately squelched–protest by the notorious Fred Phelps of the Westboro Baptist Church. (Phelps’ actions in the past, for those of you who don’t remember, have included protests at the funerals of members of the military, and gay pride celebrations.)

Responding to the WBC’s intended protest, the school district acted to obtain an injunction against the WBC. The result: the protest was cancelled and tonight’s scheduled performance should happen without incident.

Besides the support that Coronado demonstrated for the importance of the production and the lessons it carried, what was most exemplary was the documented learning that students at the school had experienced during the rehearsal process.  As one student actor commented in response to those who thought the play inappropriate for a teen audience: “I would say high school and college students are at the peak of their insecurity and uncertainty, so if we aren’t the kids that are supposed to see this and stop our actions, who are? Once you’re older, you’re already firm in your beliefs, but we are the generation who can change.” 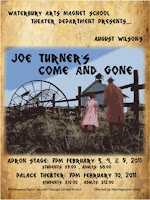 Lessons learned. And some may not be learned if David Snead, the superintendent who is trying to block the Waterbury Arts Magnet’s production of August Wilson’s “Joe Turner’s Come and Gone” has his way. The New York Times reported that Nina A. Smith, the Waterbury drama teacher, had worked hard “to ensure that the play and its moments of offensive language are understood in context and viewed as a learning experience. She prepared a study guide for classes to talk about the play, and was organizing post-performance talkbacks so the cast and audience members could discuss the work. She also opened rehearsals to the parents of the cast and crew.”

We need more such educational arts programming in our schools. I hope to explore these and other issues in my upcoming summer seminar for school teachers on the political theory of Hannah Arendt. I encourage interested educators to apply!

And, just as a final bit of news about why art matters to politics and vice versa…I note that there will be a benefit performance of the Belarus Free Theatre’s Being Harold Pinter, on Jan 17, 2011 at New York’s Public Theatre, featuring a stellar cast. And a parallel event at Washington D.C.’s Theatre J (where I first saw Kate Fodor’s Hannah and Martin, a play I went on to produce in San Diego).